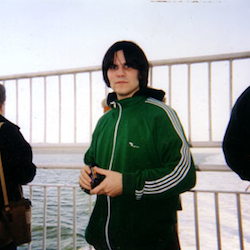 Victor Villarreal is perhaps best known as the mastermind guitarist behind Cap’n Jazz – a band which has, in no small way, helped shape the evolution of indie rock. A Chicago native, Victor’s high school band has influenced a shit-ton of bands, and channeled fist-pumping energy into just about every angsty emo/punk kid for the last decade. Post-Cap’n Jazz, Victor has played in amazing bands like Owls, Ghosts & Vodka, and most recently, Joan of Arc.

Victor Villarreal is widely considered to be one of the most inventive and cutting-edge guitarists of modern indie rock. His unique guitar style includes elements of classical, spanish, indie and even metal. Victor is in a world all his own. And unless a cantaloupe is involved, he is probably unaware of it. That is to say: Victor’s intentions are ingenuous, and his art is pure

Berlin’s mOck deliver an intricate brand of post-whatever, toying with the conventions of punk rock, of indie rock, of various, yet specific, underground sounds. As precise as they are playful, they unfurl their patterns gracefully, one puzzle piece at a time, capturing you in the most clever way, then letting you go just to repeat the ensnarement ad infinitum. mOck are releasing their debut full length, mixed by John McEntire (Tortoise), in February 2012, offering the style of oblique smart rock which they know best. Keep your eyes and ears peeled, because every moment is a waking one, every beat is a gesture, every note is a delicately placed object, and mOck promises much for the future of their niche and beyond.
mOck are playing live as often as their day jobs and studies will let them. In 2010 they went on a two week tour in the US, a pretty bold endeavor for a band which at that point was playing shows for only a year. Many ambitious objectives in music and travels are to follow.